This wiki has been automatically closed because there have been no edits or log actions made within the last 60 days. If you are a user (who is not the bureaucrat) that wishes for this wiki to be reopened, please request that at Requests for reopening wikis. If this wiki is not reopened within 6 months it may be deleted. Note: If you are a bureaucrat on this wiki, you can go to Special:ManageWiki and uncheck the "Closed" box to reopen it. 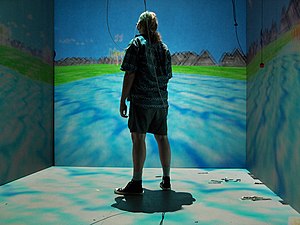 The cave automatic virtual environment is an immersive virtual reality environment that provides a "cyberdelic experience" where the user can contemplate perception, reality and illusion

Cyberdelic (a portmanteau word combining prefix "cyber-" and "psychedelic") is a term used to refer to either:

Timothy Leary, an advocate of psychedelic drug use who became a cult figure of the hippies in the 1960s, reemerged in the 1980s as a spokesperson of the cyberdelic counterculture, whose adherents called themselves "cyberpunks", and became one of the most philosophical promoters of personal computers (PC), the Internet, and immersive virtual reality. Leary proclaimed that the "PC is the LSD of the 1990s" and admonished bohemians to "turn on, boot up, jack in".[1][2]

In contrast to some of the hippies of the 1960s who were antiscience and antitechnology, the cyberpunks of the 1980s and 1990s ecstatically embraced technology and the hacker ethic. They believed that high technology (and smart drugs) could help human beings overcome limits, that it could liberate them from authority and even enable them to transcend space, time, and body. They often expressed their ethos and aesthetics through cyberart and reality hacking.

R. U. Sirius, co-founder and original editor-in-chief of Mondo 2000 magazine, became a prominent promoter of the cyberpunk ideology, whose adherents were pioneers in the IT industry of Silicon Valley and the West Coast of the United States.[2]

In 1992, Billy Idol became influenced by the cyberdelic subculture and the cyberpunk fiction genre. The result of his passion for the ideals behind the culture resulted in his 1993 concept album, Cyberpunk, which Idol hoped would introduce Idol's fans and other musicians to the opportunities presented by digital technology and cyberculture.[3] Timothy Leary and other members of the cyberdelic movement were contacted by Idol, and participated in the album's creation.[4] The album was a critical and financial failure, and polarized online cyberculture communities of the period. Detractors viewed it as an act of co-optation and opportunistic commercialization. It was also seen as part of a process that saw the overuse of the term "cyberpunk" until the word lost meaning.[5][6] Alternatively, supporters saw Idol's efforts as harmless and well-intentioned, and were encouraged by his new interest in cyberculture.[7][8]

After the dot-com bubble of the late 1990s burst in 2000, the techno-utopianism that prevailed in the cyberdelic counterculture waned while technorealism grew. Most cyberpunks realized that the PC, the Internet, and other new technologies did not really bring the radical social, political, and personal changes they thought they would, specifically the "cybersociety" - a postpolitical, non-hierarchical society made possible by cyberware, in which the computer-literate, super-intelligent, open-minded, change-oriented, self-reliant, irreverent free-thinker is the norm and the person who is not internetted and does not think for him or herself and does not question authority is the "problem person".[2]

Retrieved from "https://memetics.miraheze.org/w/index.php?title=Cyberdelic&oldid=831"
Categories:
Cookies help us deliver our services. By using our services, you agree to our use of cookies.