From Memetics
Jump to navigation Jump to search

Ideasthesia (alternative spelling ideaesthesia) is defined as a phenomenon in which activations of concepts (inducers) evoke perception-like experiences (concurrents). The name comes from the Ancient Greek ἰδέα (idéa) and αἴσθησις (aísthēsis), meaning "sensing concepts" or "sensing ideas".[1] The main reason for introducing the notion of ideasthesia was the problems with synesthesia. While "synesthesia" means "union of senses", empirical evidence indicated that this was an incorrect explanation of a set of phenomena traditionally covered by this heading. Syn-aesthesis denoting also "co-perceiving", implies the association of two sensory elements with little connection to the cognitive level. However, according to others,[2][3][4][5][6][7] most phenomena that have inadvertently been linked to synesthesia in fact are induced by the semantic representations. That is, the meaning of the stimulus is what is important rather than its sensory properties, as would be implied by the term synesthesia. In other words, while synesthesia presumes that both the trigger (inducer) and the resulting experience (concurrent) are of sensory nature, ideasthesia presumes that only the resulting experience is of sensory nature while the trigger is semantic. Meanwhile, the concept of ideasthesia developed into a theory of how we perceive and the research has extended to topics other than synesthesia — as the concept of ideasthesia turned out applicable to our everyday perception. Ideasthesia has been even applied to the theory of art. Research on ideasthesia bears important implications for solving the mystery of human conscious experience, which according to ideasthesia, is grounded in how we activate concepts.[8]

An illustration drawn by a synesthete showing her time unit - space synesthesia/ideasthesia: the months in a year are organized into a circle surrounding her body, each month having a fixed location in space and a unique color.

A common example of synesthesia is the association between graphemes and colors, usually referred to as grapheme-color synesthesia. Here, letters of the alphabet are associated with vivid experiences of color. Studies have indicated that the perceived color is context-dependent and is determined by the extracted meaning of a stimulus. For example, an ambiguous stimulus '5' that can be interpreted either as 'S' or '5' will have the color associated with 'S' or with '5', depending on the context in which it is presented. If presented among numbers, it will be interpreted as '5' and will associate the respective color. If presented among letters, it will be interpreted as 'S' and will associate the respective synesthetic color.[2]

In another study, synesthetes were prompted to form novel synesthetic associations to graphemes never seen before. Synesthetes created those associations within minutes or seconds - which was time too short to account for creation of new physical connections between color representation and grapheme representation areas in the brain,[9] pointing again towards ideasthesia.

It has been argued that grapheme-color synesthesia for geminate consonants also provides evidence for ideasthesia.[12]

One-shot synesthesia: There are synesthetic experiences that can occur just once in lifetime, and are dubbed one-shot synesthesia. Investigation of such cases has indicated that such unique experiences typically occur when a synesthete is involved in an intensive mental and emotional activity such as making important plans for future or reflecting on their life. It has been thus concluded that this is also a form of ideasthesia.[14] 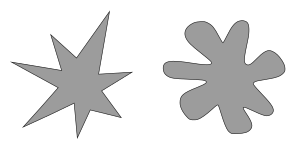 Which one would be called Bouba and which Kiki? Responses are highly consistent among people. This is an example of ideasthesia as the conceptualization of the stimulus plays an important role.

Recently,Template:When it has been suggested that the Bouba/Kiki phenomenon is a case of ideasthesia.[15][16][17] Most people will agree that the star-shaped object on the left is named Kiki and the round one on the right Bouba.[18][19] It has been assumed that these associations come from direct connections between visual and auditory cortices.[19] For example, according to that hypothesis, representations of sharp inflections in the star-shaped object would be physically connected to the representations of sharp inflection in the sound of Kiki. However, Gomez et al.[15][20] have shown that Kiki/Bouba associations are much richer as either word and either image is associated semantically to a number of concepts such as white or black color, feminine vs. masculine, cold vs. hot, and others. These sound-shape associations seem to be related through a large overlap between semantic networks of Kiki and star-shape on one hand, and Bouba and round-shape on the other hand. For example, both Kiki and star-shape are clever, small, thin and nervous. This indicates that behind Kiki-Bouba effect lies a rich semantic network. In other words, our sensory experience is largely determined by the meaning that we assign to stimuli. Food description and wine tasting is another domain in which ideasthetic association between flavor and other modalities such as shape may play an important role.[21] These semantic-like relations play a role in successful marketing; the name of a product should match its other characteristics.[22]

Implications for development of synesthesia[edit]

The concept of ideasthesia bears implications for understanding how synesthesia develops in children. Synesthetic children may associate concrete sensory-like experiences primarily to the abstract concepts that they have otherwise difficulties dealing with.[8] Synesthesia may thus be used as a cognitive tool to cope with the abstractness of the learning materials imposed by the educational system — referred to also as a "semantic vacuum hypothesis". This hypothesis explains why the most common inducers in synesthesia are graphemes and time units — both relating to the first truly abstract ideas that a child needs to master.[23]

The concept of ideasthesia has been often discussed in relation to art,[24][25][26][27][28] and also used to formulate a psychological theory of art.[29] According to the theory, we consider something to be a piece of art when experiences induced by the piece are accurately balanced with semantics induced by the same piece. Thus, a piece of art makes us both strongly think and strongly experience. Moreover, the two must be perfectly balanced such that the most salient stimulus or event is both the one that evokes strongest experiences (fear, joy, ... ) and strongest cognition (recall, memory, ...) — in other words, idea is well balanced with aesthesia.

Ideasthesia theory of art may be used for psychological studies of aesthetics. It may also help explain classificatory disputes about art as its main tenet is that experience of art can only be individual, depending on person's unique knowledge, experiences and history.[29] There could exist no general classification of art satisfactorily applicable to each and all individuals.

Ideasthesia is congruent with the theory of brain functioning known as practopoiesis[30]. According to that theory, concepts are not an emergent property of highly developed, specialized neuronal networks in the brain, as is usually assumed; rather, concepts are proposed to be fundamental to the very adaptive principles by which living systems and the brain operate.[31]

Retrieved from "https://memetics.miraheze.org/w/index.php?title=Ideasthesia&oldid=751"
Categories:
Cookies help us deliver our services. By using our services, you agree to our use of cookies.